There are many hiking trails in Vermont's Northeast Kingdom.  Links to those most commonly travailed, such as those found in the Willoughby State Forest and managed by the Northwoods Stewardship Center, are available. ...More 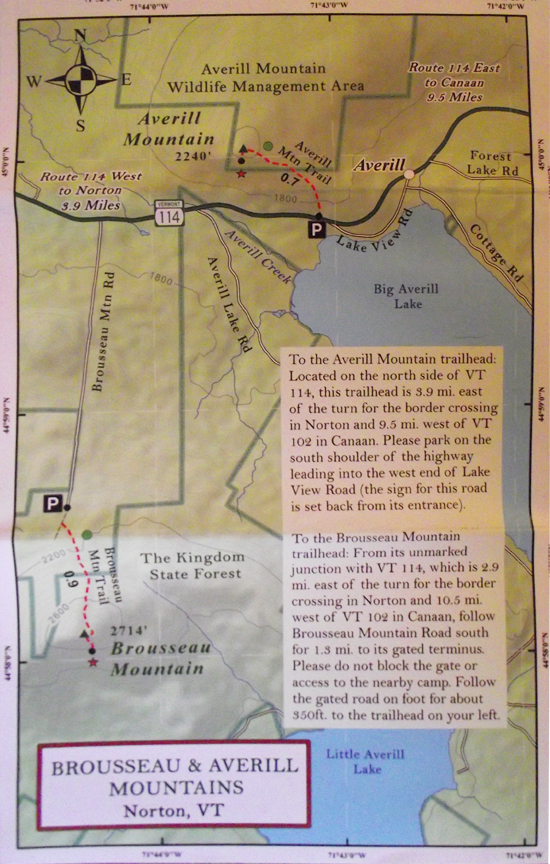 However, there is little information on Gore Mountain, Monadnock Mountain and Brosseau Mountain. In the far reaches of the northeast corner of Vermont these three mountains offer some great backcountry hiking, an abundance of wildlife and geological and historic significance.

Important Notice: The cliffs on Brousseau Mountain are home to the rare Peregrine Falcon.  These recently endangered birds are still recovering in Vermont and may be disturbed by human activity.  You can help Peregrine restoration in Vermont! Pay attention to signs warning you about Peregrine nests and, if possible, plan your hiking trips to avoid nesting areas during the incubation period: March 1 – August 1.

Brousseau Mountain (elev. 2723 ft.) in Norton offers a short and scenic hike that is considered by many to be the best view for the effort.  Due to its far northern locale, this local favorite is seldom visited by mainstream hikers and often provides a solitary experience.

The Trail on Brousseau Mountain has existed for many decades and once tied into a more extensive trail network centered at the Quimby Country Lodge at nearby Forest Lake.  While many of these trails have disappeared, the Brousseau Mountain Trail still receives moderate, if local, use and has recently been maintained by NorthWoods Conservation Corps trail crews and volunteers. As you hike Brousseau Mountain, please remember to respect private land and Leave No Trace- if you pack it in, please pack it out.

Much of Brousseau Mountain is covered by sub-alpine spruce-fir forests that prefer to the shallow moist soils and rocky terrain.  A unique phenomenon known as a “spruce wave” can be found on the exposed northwest slope of Brousseau.  This “wave” is actually a long-term pattern of forest succession characterized by repeated three dieback as a result of intense cold and wind.

Located in the unorganized town of Avery’s Gore, Gore Mountain (3332 ft.) sits on the northern edge of the Nulhegan River Basin and is the second highest peak in the Northeast Kingdom.  The wooded summit provides limited views but, at nearly 4 miles long, the trail offers a very remote, backcountry experience for those seeking solitude.

Gore Mountain was one of several fire lookout stations located in the Northeast Kingdom.  Together with Monadnock, West and Burke Mountains, the Gore Mountain lookout serviced the Essex County region, relaying fire safety information to a dispatcher in Maidstone via eighty-eight miles of telegraph line installed by the CCC.

The fire lookout station on Gore was only the third such lookout established in the state of Vermont- built in 1912 shortly after a lookout site was established on Camel’s Hump (no tower) in 1911 and Burke Mountain (built by Elmer Darling) in 1912.  This action was prompted by several large fires in Vermont, including one that burned1200-acres in Lewis, Ferdinand, Bloomfield, Brunswick and Brighton in 1903.  The station included both a fire tower and warden’s cabin on the summit.  Reportedly, the tower, constructed in 1934 by the CCC to replace an older tower (date unknown) was sold in the 1970’s and hauled off the mountain by a skidder.  The cabin still stands.

The Gore Mountain Trail was re-established in 2000 by a Northwood’s Stewardship Center Trail.  Crew after years of neglect and, despite some necessary changes, follows the historic fire warden’s trail for much of its length.

Monadnock Mountain (elev. 3148 ft.) has the distinction of being the most easternmost mountain in Vermont.  It is also distinct due to the fact that, like its southern cousin, in New Hampshire., it is a true Monadnock- a peak that sits alone and stands high above the surrounding landscape.  Purported to be the remnant core of an extinct volcano, Monadnock rises steeply over the northern Connecticut River Valley and offers a challenging, but rewarding, hike.  Extensive views are possible from the recently restored summit fire tower, views that extend up and down the river valley below as well as into northern New Hampshire, western Maine, southern Quebec and northern Vermont. 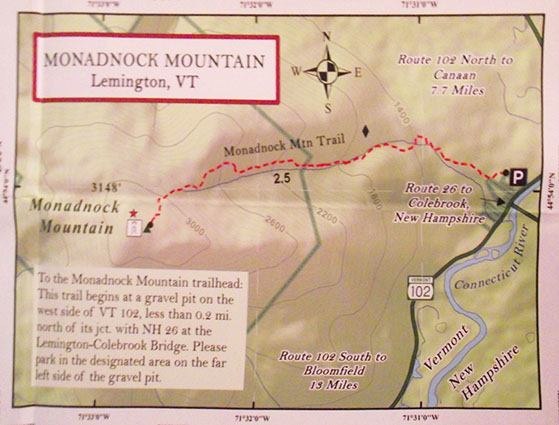 Monadnock’s trail history is tied closely to that of the Civilian Conservation Corp (CCC), the Northeast Kingdom fire lookout system, and the Connecticut River Valley.  Located in the tiny town of Lemington, Vermont (pop. 107), Monadnock is also closely associated with the much larger community of Colebrook, New Hampshire, situated just across the Connecticut River.

Similarly, Monadnock’s geology is closely tied to that of northern New Hampshire.  The mountain belongs to a very localized igneous pluton formed of magma that was intruded into the surrounding metamorphic bedrock sometime late in the Acadian Orogeny, a mountain building event that occurred some 350 million years ago.  The bedrock on Monadnock is unique, however, and varies from other plutons in the region. Myers describes it as ”greenish-grey to pink quartz syenite close to granite in composition”.

Unlike the Green Mountain Range, which is composed primarily of metamorphic bedrock that was formed under intense heat and pressure caused by the collision of continents, Monadnock was formed as a result of molten magma rising up through (or “intruding”) the earth’s crust and pushing aside the surrounding bedrock.  As the “softer” rocks around Monadnock eroded away, the mountain’s granite core remained and, eventually, came to stand high above the surrounding landscape.

Source: The above text is an excerpt from Northeast Kingdom Mountain Trail Guide by Luke O'Brien, Printed in 2010, available at the Northwoods Stewardship Center in East Charleston, VT.

Hiking Tips - Trails are  Marked! with Signs that Tell You the Following: