Lyndonvile, Vermont is a center of activity with its many shops, restaurants and town green that hosts many events throughout the summer months.

Known at a center for antiques, the downtown district is home to a number of antique stores that carry antiques from the 19th and 20th century, including furniture, portraits, vintage clothing, coins, estate jewelry, rare books and dolls. 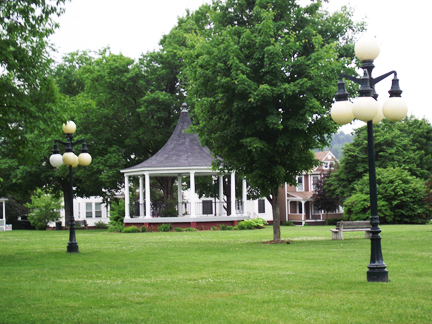 Lyndonville, VT is home to Vermont covered bridges and at least one is still in use today. The design may seem untraditional, though the curvature and extended archway has allowed the bridges to survive a longer period of time. The Chamberlin Bridge is more than 200 years old and is in use for automobiles, bikes and other travelers who would traverse the old wooden structure to make it to the other side.

The VAST Trail in Lyndon, VT, map above, will bring you directly north, though, snow machine travelers may connect after a short distance to trails that will bring you to points north, south, east and west.

In 1931, a Boston paper reported that the town had become a haven for "Rum Running Gangsters!

In keeping with the times, rum running and moonshine making were prevalent in the area, according to locals.