Montgomery, Vermont is a quaint picturesque village located just west of Jay Peak. The village caters to visitors year round with its pristine Vermont country inns and trend setting restaurants that present a superb array of chef's cuisine.

The town is home to historic sites, rolling hillsides, farms, rivers, pastures and the Long Trail.

Just minutes from the Jay Peak Resort, the town welcomes skiers in the winter who enjoy the superb skiing conditions offered nearby.

Montgomery is known as Vermont's Covered Bridge Town. Its unique geography required many bridges, and as recently as the 1940s there were thirteen covered bridges within the town's limits. Today there are six covered bridges within town limits, and one which straddles the town line with Enosburg Falls, the most of any town in the country.

The town was named after Revolutionary War hero General Richard Montgomery on March 15, 1780. The town's charter was approved in 1793, 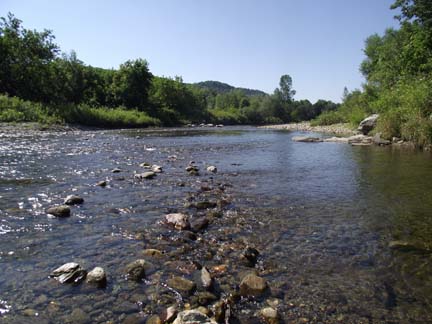 Carved in Vermont by the Green Mountain Club between 1910 and 1930, the Long Trail, that extends along eastern United States, is the oldest long-distance hiking trail in the United States. The Long Trail travails along the main ridge of the Green Mountains from the Massachusetts-Vermont line to the Canadian border as it crosses Vermont's highest peaks. It inspired the Appalachian Trail, which coincides with it for one hundred miles in the southern third of the state.

The Long Trail passes through Montgomery Vermont, before bringing hikers to traverse Jay Peak. From there, the Long Trail extends into North Troy, where its trek as a United States hiking trail ends.

The Long Trail is steep, muddy, and rugged. Novice and expert alike will enjoy the varied terrain of the trail as it passes through the heart of Vermont's backwoods.

With its 273-mile footpath, 175 miles of side trails, and nearly 70 primitive shelters, the Long Trail offers endless hiking opportunities for the day hiker, weekend over-nighter, and extended backpacker.

The Long Trail Guide is the official guide to the Long Trail and its network of side trails. The Long Trail is marked by two-by-six-inch white blazes. Along the trail, intersections are usually marked with signs.

Double blazes may mark important turns. Side trails are blazed in blue and signed

Along the Long Trail in Vermont, you'll also find 70 primitive shelters, the Long Trail Patrol and volunteers. Need help along the trail? Look for Caretakers who are happy to give advice to hikers.

The VAST Trail in Montgomery winds down Montgomery Center's main street to allow travelers to visit local shops, lodging and restaurants.  Some extension to the north will bring you parallel to the border to Quebec, as well as points south, east and west.