Westmore, Vermont is most notably known as the home of Willoughby Lake or Lake Willoughby, as it is often referred. The glacial lake resembles a Norwegian Fjord as it extends between two mountain ranges and is unusually visually captivating. The lake and surrounding mountain ranges present is a magnificent portrait, courtesy of Mother Nature. The lake, as a result, is a Natural National Landmark, simply because of its beauty. 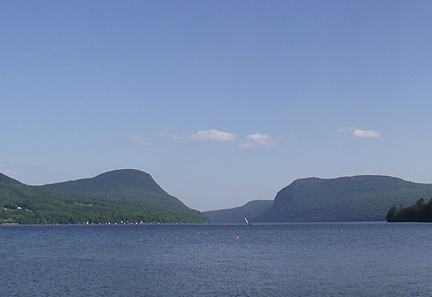 The town of Westmore, as a result, is a four season retreat for nature lovers with the lake offering year round enjoyment, the VAST Trail, and the town's hiking trails that extend to mountain peaks above Willoughby Lake.

The VAST Trail in Westmore, VT, map above, touches Lake Willoughby at North Beach ONLY, however, from the north extends northeast and west to connecting trails that extend throughout Vermont and into Quebec.

The 12,000-year-old glacier-carved lake is carved on the east by Mount Pisgah 2,752 feet (839 m) and the west by Mount Hor 2,654 feet (809 m). The mountains are a part of the Willoughby State Forest and the cliffs, as well as the lake, have been designated a National Natural Landmark. In recent decades, several peregrine falcons have been found there.

Robert Frost, the famous poet, camped on Lake Willoughby in 1909 with his family.

The Town of Westmore was originally chartered as Westford on August 17, 1781. Since another town in Chittenden county had previously acquired the name Westford, the town of Westford was re- named Westmore in 1787.

Nudity is legal throughout Vermont, though in 2007-8, the town considered whether to ban nudity, aimed at sunbathers on the south beach of Lake Willoughby.

In Westmore, Vermont, choose from a number of hiking trails that extend above Lake Willoughby, offering breathtaking views. The trails offer a mild to moderate climb. The entrances are found on VT Route 5A surrounding Lake Willoughby. ...More

The town of Westmore has a nine hole golf course. ...More